Egypt, the country of my heart, held its first presidential elections on May 23-24. I’ll skip the frenzy before, during and after the elections, there are tons of articles, tweets, Storify-curations, Facebook reports and pictures. What is interesting for me to address here is the possibility of having to choose between Morsi and Shafik, the “spare tyre” as dubbed by the Times for the former and the felool and former Mubarak best buddy for the latter.

Yeah, this sucks. Seriously. And yeah, what a nightmare to have these two as the contenders and having to choose between the best evil and the least pest (you put the label to whom it fits the best, I cannot). For me, both are illegitimate candidates. Not only because Morsi is there just to replace El-Shater (another Muslim Brotherhood official who was achieving something really challenging: scaring the sh*t out of all revolutionaries I know); not only because Shafik is accused of corruption, and this is amongst the least of the delightful things he has accomplished under Mubarak’s caring look. These elections saw more than 600 people attempting to register as official candidates. These elections saw representatives from all types of political organizations run for the supreme position. And… these elections were organized by the military junta, aka SCAF, the same ones that has been killing civilians or continue judging the survived through military trials.

(The fact that it is beyond my comprehension to assimilate the idea of people having lived for the last 30 years under Mubarak and now, 15 months after the Revolution, telling his presumed successor “ok, we give you our vote to govern and repress us 4 more years” doesn’t make these candidates illegitimate.)

And you read such crap:

“Many citizens believe that instead of joining political life and competing for seats in parliament in a peaceful way, the young revolutionary movements opted for violent trouble on the street, first in the form of staging million-man protests at Tahrir Square or in the form of attempts to storm the buildings of the interior ministry, parliament and ministry of defence, or by raising the slogan “Down with military rule,” said Abdel-Gawad.

Agreeing with Abdel-Gawad, prominent lawyer Ragaie Attia said: “The irresponsibility of these revolutionary youth movements led the vast majority of citizens to seek shelter in a man with a strong personality and who can stand up to these anarchistic elements and contain Islamists. and for them former prime minister Shafiq was this man.”

Which actually is a quite — unpleasant but — somehow true standpoint. Yes, sorry. The inability to gather and stand behind ElBaradei — whom, to be honest, I don’t like because of his frightened transparent personality –, and, more importantly, the inability to build a concrete robust organization which should have presented candidates for the Parliament are just issues that paved the way to where we are today. And what makes me rage the most is that the SCAF criminals didn’t even need to get into another ugly discredit campaign as they did targeting the April 6 Movement.

The outreach to the very simple rural people was negligeable. Although it is essential for a country to have a Constitution, was it the most important thing to fight for while 40% of the population is illiterate and people have nothing to put on the table for dinner? And please, don’t come along with insults that the white European mozza wants to give lessons. Unfortunately, it looks like too little attention has been paid to Sandmonkey’s thoughts from “Underneath”, although it is really worth reading it. Many times.

Honestly, let’s move beyond. Instead of wasting time, efforts, throwing insults and searching for the guilty, which all ends as a dead end, let’s think 🙂 First, as it is better to have a glass half-full than half-empty, let’s just look at the results as 75% of the Egyptians refusing to have an Ikhwany for a president, and — 60% refusing to have a felool. And yes, after all, Khaled Ali made it to the seventh position! (This guy is just great, really, although my principles lead me to not participate to elections, I’d have voted for him if I was allowed to do so.)

What are the options? First one is that Sabbahi miraculously bridges the several hundreds of thousands of votes that separate him from Shafik, before Tuesday May 29 (day of official results). Since differences in counts don’t seem that huge between the sources, and all governorates have been included into the current results, this option seems unlikely.

The second option is to go back to politics. In the noble sense ya3ny. From one side, we have Alaa al-Aswany asserting to be able to present 35 cases for corruption in which Shafik is involved while being in office. This is good, why not having presented them earlier? Removing felools out of the political life in Egypt is a priority anytime, not only before/during presidential elections. (Sorry if I have missed news for trials against him based on these accusations since the Revolution started.)

From the other side, we have something known as the anti-felool law. It is amendements of the political rights law, prompted by Ikhwany in the Parliament (they have had a great idea, this should be notified and not only because it happens exceptionally). Ok, chances this law gets voted before the runoff and is used to disqualify Shafik seem thin since Ikhwan has no real motive to urge this now (especially when Shafik shamelessly flirts with them saying he’ll accept an Ikhwan-led government).

Third option is to have one of the two frontrunners removed. None of them seem to be willing to do so, of course, so either legal charges against Shafik must be filed ASAP to have him out as — my guess is — no serious legislation would allow having a candidate under investigation. Reports from all over Egypt point to irregularities during the votes where police and army were actively supporting and intervening to secure ballots for Shafik. In parallel, MP Amr Hamzawy has called for Morsi to get out of the run. Any of these would work if happening (and I love the idea of Morsi stepping down and having the symbol of the regime beaten on the political ground as well 🙂 Cuz yes, it is kind of clear that, if Sabahi faced Shafik, it’ll be close to Mubarak’s scores for Hamdeen.).

Forth option would be to have an all-together-against-felool coalition, as for instance suggested here: 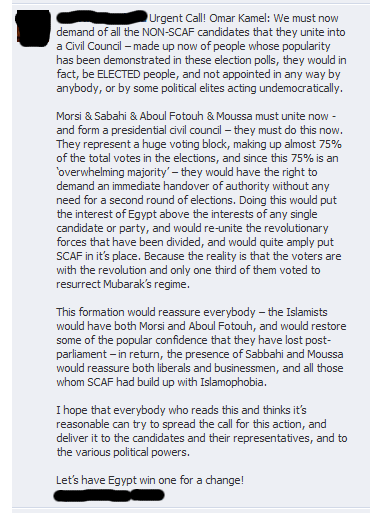 To be honest, if nothing else is done, this may very well happen in the ballots, to counter Shafik, with the risk of establishing a new type of dictatorship (la2, not talking from the-white-European-mozza-perspective of “ohhhh, how bad are the islamists, ohhh, they will kill us all”). Well, yeah, when you have a president from a given party, who names the government according to his will — and I doubt Morsi and his buddies from Ikhwan will let many non-compliant to enter the gov’t — and you have a majority in the Parliament (which is where laws are voted), how do you call it if not a dictatorship? (Ah, sorry, the Parliament may name the government as well, if they don’t behave as cowards once again and leave it to the junta.). Whether Sabahi will accept a coalition with Morsi or Moussa… Here, I fear we go out of the honest politics — yalla, this may exist 🙂 — and we go into some haggling-wrangling “you got that many % , you’ll be able to appoint x ministers”. Such an image, and especially how much this kind of negotiations will go into the press and on TV are very likely to harm the image of all involved, unvoluntareely bringing the votes to the only one left out of this, that is Shafik…

My personal option would be to use as much the legal tools that exist: pushing for the anti-felool law while filing complaints against Shafik so that he ends up disqualified. Apparently, others have found the idea about going legally against Shafik a good one… Yalla ya Hamdeen!