Since the brutal clear-out of the two pro-Morsi sit-ins in Cairo, grim and worrisome details of looting and theft emerge. I have already thoroughly documented destruction of diverse Christian properties. Below are details about stolen/looted cultural heritage (museums, archaeological sites, antiquities of all sorts).

This is ongoing work, thanks for letting me know if I’ve missed anything, either by leaving a comment below or through tweeting at me.

All the objects are now safe at al-Ashmounein store room.

All information by Monica Hanna.

According to the website of Egypt’s Supreme Council of Antiquities:

The Malawi Monuments Museum houses a collection of artifacts from the nearby sites of Tuna al-Gebel and Hermopolis. Among the objects on display are a number of animal mummies and statues associated with the worship of the god Thoth.

Opened in 1963, the Museum contained hundreds of rare pieces of and mummies, Pharaonic granite coffins, pottery and coins, from ancient Egypt and the Greco-Roman period, amongst other treasures.

During clashes on Wednesday, August 14, the Malawi Museum was attacked: pro-Morsi protesters allegedly broke into the museum property, adjacent to the town police station and the Malawi council building, and announced their sit-in in the museum’s garden. The assaillants tore down the door and entered all the halls, ransacking all on their way:

All small pieces of the Mallawi museum are completely looted, all of the Amarna Period. #Egypt #Heritage #Antiquities #Looting

Ahram Online reports that no police were reportedly present at the museum. Aswat Masriya reports (Ar) that at least one employee of the Museum has been killed during the clashes (identified by Minya General Hospital). Thus far, it is unclear who stole the antiquities, as these are often attacked whenever there is a security vacuum or major disturbance.

All museums and archaeological sites were closed for security reasons undefinitely, with the Ministry of Antiquities denying reports on breach in the National Museum of Alexandria, and at the Malawi National Museum. Despite alarming and confirmed reports about theft and severe damage in the Malawi Museum, the Ministry of Antiquities re-opened the country’s museums and archaeological sites as normal; only the Malawi Museum remains closed.

Reports by archaeologists claim (Ar) at least 1,000 objects were stolen. More than 600 images of objects have been published, and are on INTERPOL’s tentative Red List. Important: Until a complete inventory is carried out on the Mallawi museum, please alert auction houses, antiquities shops and customs offices of the following objects that could have been looted today from the museum.

In the late evening of Thursday, August 15, the Museum has been reported burning. This is unconfirmed report. 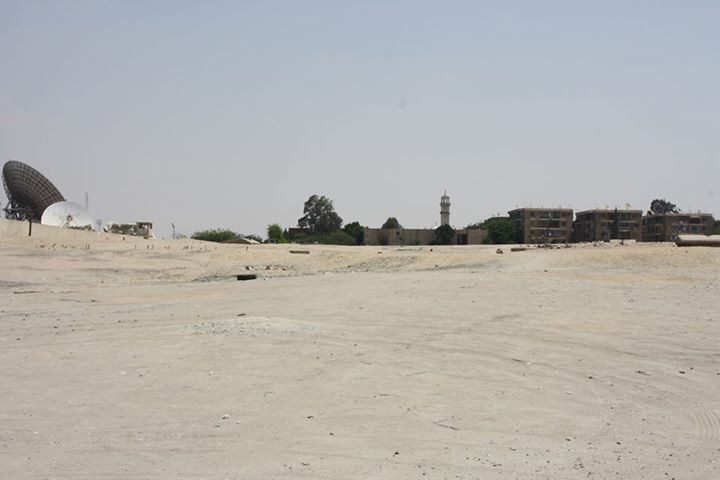 Reports have circulated that assaillants attempted to enter the Luxor and Karnak Temples in the afternoon of August 14. Apparently, no police presence has been recorded nearby.  At the same time, an image from the Abu el-Haggag square (below) shows the bruning of Horus Hotel. Gun shots are exchanged at that area (source). Meanwhile, the Luxor Antiquities Authority has ordered the closing of all temples in the area, for security reasons (source, Ar), and these have remained so during the whole day of August 15. In addition, the Brigadier-General Bahaa Hamed ensured no floating hotels (cruises boats, that is) have been burnt or damaged. ONTV published a short report (video, Ar) on the situation in Luxor in the awake of the August 14 violence. 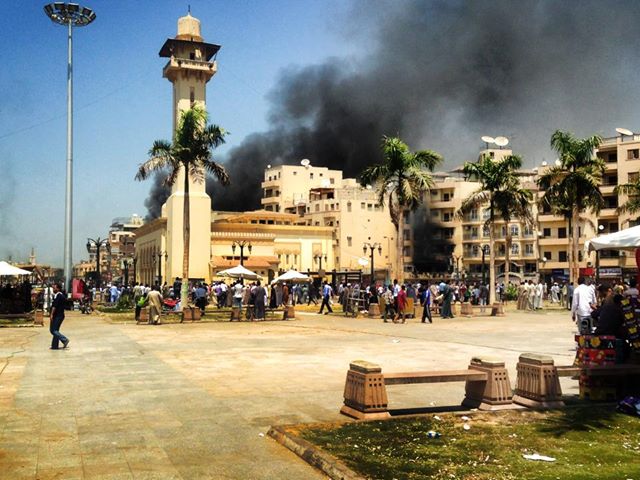 Among the numerous churches attacked on August 14 were these two:

Other images from various Christian institutions under attack in Minya available in the dedicated gallery.

Other images from various Christian institutions under attack in Egypt available in the dedicated gallery. No cultural or archaeological site has been reported attacked, looted or damaged in Luxor.

It seems that the Minister of Antiquities is trying to secure some funds allowing to have more security forces around museums and archaeological sites, and thus to improve their security (source, Ar).

20 thoughts on “Egypt’s Heritage in Danger”