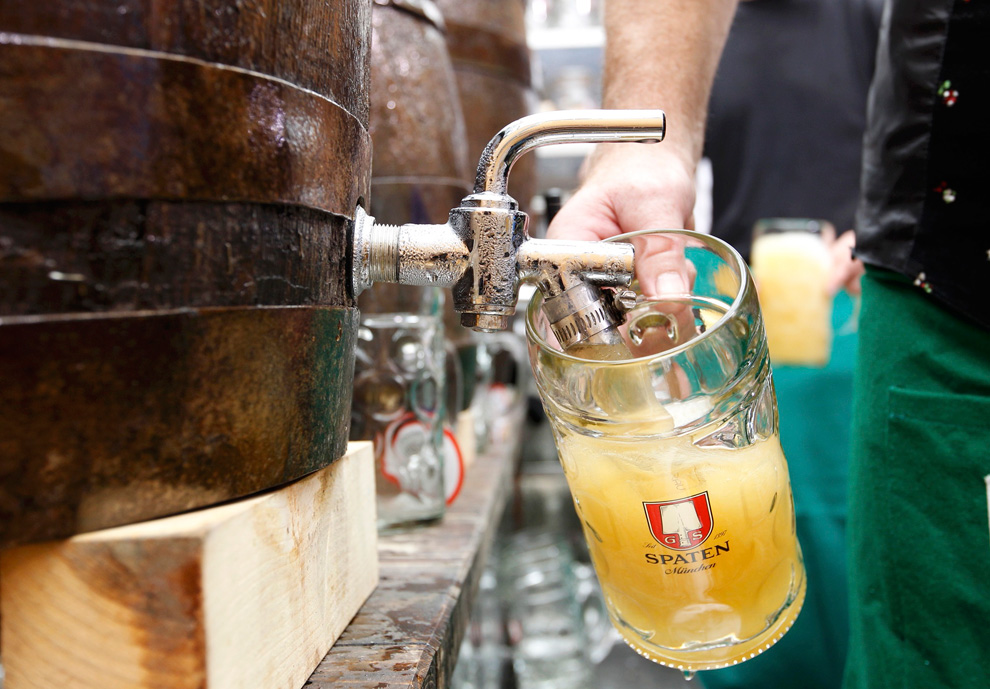 On September 18, the 200th edition of Oktoberfest was kicked off in Munich, Germany. Roasted chicken, weisswurst and tasty bretzels are all around, and of course, the beer! In this edition of Cell Culture, the whole beer journey is presented: from the foamy Mass to tourist’s liver. Michaeleen Doucleff writes a must-read report about it. Nice trip!

What makes the foam?

Whatever the name of the foam, it is very important for beer drinkers. But how is it produced? Why is it only found in beer and in no other alcohol? In a paper published in 2009 in Biochemistry, Mills et al. describe LTP1, the lipid-transport protein from barley. LTP1 is a primary protein in beer foam attaining 40mg/mL. It possesses both hydrophilic and hydrophobic surfaces which allow it to align at the air-water interface of a bubble. This results in lower surface tension. One of the interesting characteristics of LTP1 is its ability to form elastic networks of proteins able to stretch. Thus, as Michaeleen Doucleff explains it, “when a bubble starts to expand, the protein layer is held in place, pulls the bubble back into shape, and prevents rupturing”.

The question is how the coalescence of small bubbles into one big and unstable one is prevented arises next. Here comes the second interesting characteristic LTP1 has: “a partial unfolding of LTP1 during the brewing process is key to stabilizing beer bubbles and increasing the quality of the head”. Most of the barley proteins are denaturated and precipitate after boiling barley and hops together during 1-2 hours prior to fermentation. According to Mills et al., LTP1 refolds after 2 hours of boiling. This refolding is not perfect though: a small segment of the C-terminal region stays unfold. Michaeleen Doucleff precises then that “this structural rearrangement enhances LTP1 surface pressure and localization at the air-buffer interface, improving its ability to stabilize bubbles”. In conclusion, the brewing conditions match well this particular characteristic of LTP1, which results in a maximized foam quality.

Where does the flavor come from?

If you have ever entered a beer tent at the Oktoberfest, the picture of people raising their Mass (1-liter stein) and toasting with a sound “Prost!” is familiar to you. The primary flavor of Oktoberfest beer comes from bitter compounds in hops. These activate the TASTE2 Receptors (TAS2R), a family of G-protein coupled receptors expressed on taste buds of our tongues. A study by Hinrich et al. published in the American Journal of Human genetics in 2006 describes the effect of small variations such as a few amino acid substitutions in the TAS2R: those can dramatically alter someone’s sensitivity to bitter compounds. Therefore, changes in the individual preferences for “hoppy” beers can be attested as well as in the amount of alcohol an individual consumes on a regular basis.

Hinrich and colleagues genotyped 4 SNPs within and flanking the TAS2R16 gene 2310 individuals from 262 families; nearly half of these individuals have been diagnosed for alcohol-related disorders. They identified a mutation resulting in a substitution N172K of the receptor protein encoded by TAS2R16 gene. This substitution is located within an extracellular loop which is predicted to bind ligands. In individuals having this mutated allele the binding affinity of the TAS2R16 receptor for some bitter compounds is reduced to ~50% in vitro. Of course, future studies are needed to enhance our knowledge of interindividual bitter tastes perceptions in relation with the TAS2R16 alleles expressed, but these results give hints for an tendency that increased sensitivity to “bitter compounds in beer and other alcoholic drinks may reduce overall consumption of alcohol”.

One stein of beer raises the level of alcohol in the blood to ~10 mM (~0.06%). At this high concentration, ethanol targets multiple channels and receptors in the central nervous system. The sedative effect of ethanol caused a record 759 bierleichen (“beer corpses”) at the last Oktoberfest in 2009. However, a paper published by Corl et al. in Cell in 2009 explains that the EGF pathway regulates lethargic effect of ethanol.

Corl and colleagues identified mutant Drosophila melanogaster which kept on imbibing ethanol even after WT had passed out. The authors identified mutations in a MAP-4 kinase gene which they named Happyhour to be responsible for this high tolerance to ethanol. MAP-4 kinases are reported to act downstream of the EGFR (EGF receptor). Indeed, when overexpressing EGFR’s ligand Spitz and thus boosting EGFR activity, Corl et al. observed flies resistant to ethanol. On the opposite, blocking EGFR activity enhances flies’ sensitivity to ethanol. The authors then treated mice with well-known inhibitors of EGFR and this resulted in their reduced consumption for alcohol and delayed recovery from a sedating dose of ethanol. Taken together, these observations indicate that Happyhour is an inhibitor of the EGF pathway and acts as a modulator of “alcohol consumption by triggering lethargy and stupor”.

Here is what happens in the stomach:

For many East Asians, this reaction is stalled at the second step. The resulting accumulation of acetaldehyde in their blood “causes nausea, dizziness and reddening of the face, even after a small quantity of beer”, writes Doucleff.

What happens is that ~40% of the East Asians express a variant of ALDH2 which has only approximately 8% the catalytic activity of the WT enzyme. Chen and colleagues published in 2008 the results of a study identifying a small molecule named Alda-1 that restores in vitro near WT activity to the mutated enzyme. Earlier this year, a study conducted by Perez-Miller and colleagues of the ALDH2 structure showed how the activator functions as a chemical chaperon increasing the maximal velocity of this mutant and its affinity for the NAD+ cofactor. In the mutant ALDH2, a substitution of a glutamate residue for a lysine “damages the structural integrity of both the NAD+-binding site and the catalytic active site”, details Doucleff. When Alda-1 binds, it restores order in these precise regions and the enzyme’s interactions with NAD+ and its substrates are stabilized.

An uncomfortable reaction to ethanol is not the only result from reduced activity of ALDH2. The latter is also associated with increased cardiac damage during heart surgery. Perhaps these structural studies will help developing better chaperons for ALDH2, “which could serve as new pharmacological tools during heart surgery”, concludes Doucleff.

Hope you enjoyed the trip! See you next year at the Wies’n!

Image from the Boston Globe