Wednesday Aug 14, 7 am saw supporters and opponents of former Egyptian president Mohamed Morsi have started fighting in Cairo. While the Rabaa sit-in was peaceful, a march towards the Ministry of Religious Endowment turned violent. At least, one protester has been killed and nine others have been injured. The march was to protest 25 new governors (mainly form the army and the police) who were sworn in by Egypt’s military rulers.

Security forces started to clear pro-Morsi sit-ins at Rabaa and Nahda squares in Cairo while clashes in front of the Ministry of Endowment were ongoing. The action follows numerous warnings from the interim leadership that any effort  would be used to clear protesters.

Meanwhile, snipers on rooftops were reported in Nasr City. The following video allegedly testifies about gunfire in the area.

Protests have started in the coastal city of Alexandria where some roads are said to be blocked. Tram trains are reported burnt by pro-Morsi supporters.

Since 8am, traffic and trains in and out of Cairo have been blocked by the Ministry of Interior. According to AFP, the measure aims to prevent pro-Morsi supporters re-gathering after being dispersed from protest camps. Al-Jazeera English journalist Rawah Rageh also confirms a huge planning of operations given the wide and coordinated blockade of railways (by MoI) and major road entry points to Cairo (by army). Bloomsberg journalist Nadine Marroushi reports CSF brigades have been preparing for the clearing since 2am that night.

Around 11am on August 14, reports were confirming that the Nahda Sq. sit-in was dispersed. The military has released aerial infra-read footage of the clear-out.

Situation is very different for the Rabaa sit-in which had transformed into a mini-city over the last few weeks, with security guards and barricades, tents serving food, and dormitories for protesters. Evidence [image, video] of heavy weaponry available at the Rabaa sit-in continues to emerge, and the state news agency MENA reported that 200 people were arrested in possession of weapons, 150 in Nahda and 50 in Rabaa al-Adaweya. Violence is escalating, as illustrated by e.g. pro-Morsi supporters using AK47 weaponry against the security brigades and successfully pushing off a police truck over 6th of October Bridge [video] in the vicinity of the Nasr City neighbourhood.

Late in the afternoon, the Rabaa al-Adaweya sit-in was finally dispersed. Eight MB leaders have been detained by security forces among whom Beltagy, El-Erian, Hegazy and Abdel Rahman el-Barr.

Clashes have been reported in the Kafr al-Zayyat city in the Governorate of Gharbiyya (north of Cairo) around 11am on Wednesday, and six people were injured at that time.

At 2pm, 12 police stations across Egypt have reportedly been attacked after citizens are advised to form popular committees. Evidence for Warraq police station fully burning down in Giza.

At 6:45pm, the Health Ministry announced five were killed and 40 injured in Suez.

During the day, governorate buildings in Alexandria and Minya have been set alight.

A huge number of schools, shops and churches have been attacked nationwide in reaction to the forced dispersal of the Cairene pro-Morsi sit-ins. Independent English-speaking news outlet Mada Masr has excellent coverage on these. A detailed list of other accidents is below as we hear of them.

1- Two churches still on fire are the Virgin and Bishop Abram Church of Dilga, Menya and the Bishopric of Sohag. (source)

4- Two more churches on fire in Nazla village of Fayoum. Some residents are blocking firefighters (source)

Morsi supporters have attacked two churches in Deramos in Minya governorate, including the churches of Abraham and the Virgin Mary and burnt part of the churches’ exteriors and broke down the doors. There is ongoing fighting between security forces and Morsi supporters in Minya. Information seems corroborated (here and here). 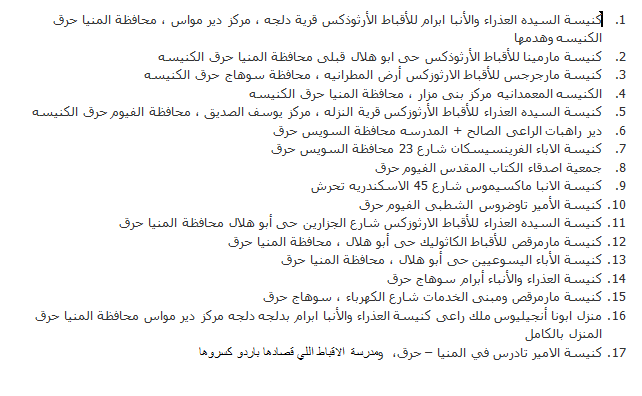 Online newspaper El-Ghoriya has also posted (Ar) the list of 17 attacked churches. News outlet Aswat Masriya reports seven churches attacked in Minya. One of these seems to be one of Egypt’s oldest Coptic churches, Virgin Mary, built in the Fourth Century.

Further reports indicate that Bon Pasteur Catholic Church in Suez has been attacked and set alight with Molotov cocktails. Bishop Anba Suriel reports that the Bible Society in Cairo has been burnt and destroyed by MB; he highlights another Bible society has suffered the same fate in Fayoum. In total, four churches in Fayoum seem to have been burned. Maspero Youth Union has also collected a list of well-described attacks on churches and related societies.

Raw footage of the Sohag church burning emerged during the day.

Other than the churches, a very complete list of other places attacked is available in Arabic here (English here). Source is Rafic Greiche from the media office of the Catholic church.

2- Franciscan Catholic school in Suez has been burned down (source)

3- a Catholic school in Minya attacked, burned down, nuns inside beat up (source)

Images from burnt churches nationwide as they arrive.

At 10:30pm, the Health Ministry confirms 278 killed and 2001 injured nationwide. The Ministry gave the following figures:

The Ministry of Health also confirmed the Interior Ministry line that 43 policemen were killed (included in the 278 total).

Muhammad Sabry from Sinai reports that one officer was killed and two policemen injured in clashes in the city of Al-Arish.

Reporters have been targeted by security forces. According to their own reports, some have been arrested, shot at, and threatened by police. Erin Cunningam from the Global Post has collected many such reports. In the beginning of the evening, reports circulated that Al-Jazeera journalist Abdullah AlShami was arrested as he was leaving the location of Nasr City sit-in. AFTE (Association for Freedom of Thought in Egypt) reports about a brutal attack of Al-Shourouk correspondent Mahmoud Al-Jaafari in Aswan, perpetrated by pro-Morsi supporters.

The Grand Imam of Al-Azhar, Ahmed al-Tayyeb, said in a televised statement today at noon that the institution hasn’t been warned about the police getting ready to disperse the sit-ins. According to the statement, Al-Azhar learnt about the brutal crackdown by media reports. He also called on everyone not to get al-Azhar involved in the ongoing incidents. Last but not least, Tayyeb also warned against violence, saying it cannot be an alternative to political choices, and urged dialogue.

These have been quick to condemn violence and call for calm and restraint, reports AJE. Transcript of Kerry’s statement is here in English. Qatari Ministry of Foreign Affairs called for whomever is in charge of the country to watch out and prevent bloodshed.

In a statement at noon today, interim government spokesperson declared the MB were to be held accountable of the ongoing violence.

This here is my letter of resignation, and I pray to God all mighty that he keep this country safe and that the people achieve their goals and that we do not lose the gains we have garnered from the revolution on the 25th of January, 2011, those gains that have forced a great deal of sacrifice from the people so they can live with democracy, justice and freedom. I have participated as much as I can, and I’ve kept preaching for all these ideologies pre and post Jan 25, and I will remain as loyal to these ideologies as I am loyal to this country and it’s people, whose progress I believe shall not come except from a completely secular state that has no religious affiliations. However, religious parties who hide behind Religious views have managed to oppose that and have managed to rise to power for a year that was undoubtedly one of the worst years in Egyptian history, and which have led to a lot of strife and sectarian conflicts.

Therefore, it was desired that the June 30th movement would put an end to this strife and this division and put the country on the right track, the track to achieving the goals of the revolution, and this is what encouraged me to accept the Rebel movement’s invitations to join the ruling party. However, that was not the case, as the country has plunged into an even deeper state of violence and segregation. Violence begets violence.
And as you all know, I have had views on how to disperse those protests in a peaceful manner, and many suggestions as to how we can begin a National reconciliation. But, after today, I think reconciliation will come but only after we pay a very high price for a long time.
Therefore, it’s become increasingly hard for me to bear the responsibility of actions I do not agree with, decisions with conscequences I fear and i cannot be responsible for a single drop of blood that will be shed. The only ones who benefit from today’s events are the terrorists and the anarchists and the extremists, and you will do well to remember what I said. May God save and Bless Egypt and it’s people.