Last year, I was closely following doctors’ strikes in Tunisia and Egypt. I wrote the major part of the piece below back in October-November 2012. For various reasons, the piece wasn’t published at that time. I am publishing it here now because the situation hasn’t changed since then: Tunisian doctors continue to stage strikes and Egyptian healthcare system hasn’t improved under now deposed president Morsi’s rule. And it’s about time something gets done to change the status quo.

In a considerable part of the MENA countries, a small part of national budgets are allocated to health [see infographic below]. Such chronic starvation naturally translates into poor status of the country’s healthcare infrastructure. Practitioners have regularly addressed funding deficiency and pandemic mismanagement in the last years, but no adequate response has been given. As is often the case in such stalemates, protests go on strikes to draw attention. 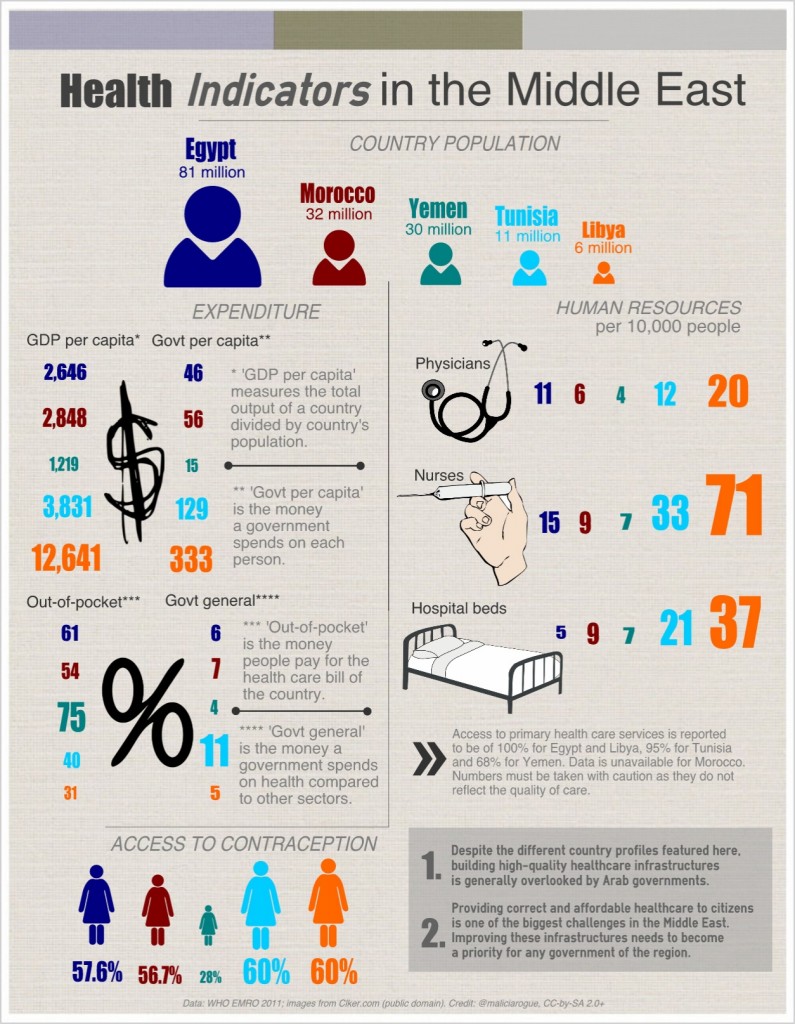 Egyptian medical practitioners started strike on 1 October 2012. The two previous ones – in May and September 2011, respectively – harboured no success. And yet, doctors’ demands are of the usual kind: improved work conditions and patient care and better wages. “The average basic monthly salary for a young Egyptian doctor working in the public health sector ranges between 300 and 400 LE (~49-65 USD), and probably less than half for nurses”, says Mostafa Hussein Omar, an independent psychiatrist working with NGOs. Physicians thus regularly refer patients to their private practice, though many are often unable to pay for the treatment.

Remaining in hospital for care can also be financially challenging: pharmacies regularly run out of medicines which compromises treatment or pushes doctors to deny treatment outright. Patients need to buy some of the consumables on their own and bring bed sheets from home. It is far from uncommon when people are misdiagnosed, suffer extreme pain due to nonexistent palliative care or an unnecessary death occurs.

Being treated in such poor conditions can take a dramatic turn: in Cairo alone, there have been hundreds of assaults on hospitals and medical workers by patients’ families in despair. Media have portrayed this surge of violence in a reductionist way depicting people resorting to it as ‘thugs’. The situation is, however, far more complex: “there is no specific legislation regulating the relationship between doctors and patients, or defining where the responsibility lies when something goes wrong”, says Amani Massoud, the Human Rights Education and Campaigns Director at the Egyptian Initiative for Personal Rights. Violently taking the law in one’s own hands is thus the ultimate resort of patients’ families.

“The only document regulating the health sector in that regard is the ‘Code of Ethics’ of the Medical Syndicate, which is non-legally binding, far from comprehensive and has its many shortcomings”, she adds. “In brief, patients are not protected by a specific law against malpractice or denial of treatment (which is of utmost importance), some patients would use the penal law to sue doctors (nowhere near as often as they do in some Western countries, of course), and doctors are also not protected by the law”.

Neither setting hospitals berserk nor protests nor mass resignation campaign have drawn government’s attention. In an escalation of the mobilization, Egyptian doctors staged a mock funeral of the country’s healthcare system on 8 November. It is unclear how the current deadlock will unfold, as the government consistently turns a  blind eye to the doctors’ demands. As Amani Massoud concludes, “the question now is how far the doctors are willing to take this knowing that, unlike a factory, they can’t go any stricter because of the stakeholders involved”.

In a follow-up of previous protests, Tunisian medical practitioners are also on a 7-day strike as of 13 November 2012. The main reason behind it is a judicial imbroglio that states that physicians have to fulfill their military service as “civil service”. Medical practitioners must spend one year in a rural area, receiving a salary of 700 TND (~440 USD) per month regardless of their specific domain of expertise. The current Ministry of Health (MoH) bases this controversial regulation on a law voted under former president Ben Ali to provide decent medical presence in so-called ‘medical deserts’.

The Tunis Doctors Syndicate (Syndicat des internes et résidents en médecine de Tunis, Sirt), one of the main organizers of the strike, tells a different side of the story. The “civil service” law is denounced as discriminatory since it targets a group of citizens solely based on their profession. Moreover, the “civil service” does not provide the same exemptions as the military: thus, every physician has to fulfill the duty regardless of sex and family status.

“This law is an attempt to dazzle the people”, says Skander Mzah, an intern in pediatrics in Tunis. “The Ministry presents the civil service as a means to bring high-quality healthcare to rural zones. But this is just pointless: the infrastructures in these areas are totally deficient. Yes, a highly qualified obstetrician will assist a woman giving birth, but if there is a complication, she has to be transferred to Tunis as there is no adequate place for treatment in the medical deserts”, he explains echoing broadly shared concerns.

Another, more complex, issue brought forward is the rigidity of this law. “After graduating as a physician, your license to practice is temporarily suspended: you are thus prohibited from starting to work in a public hospital or founding your own private practice”, continues Skander Mzah. “You have to comply with the civil service, which pays less than the equivalent position in the public sector. Such a procedure is equivalent to forced labour. But Tunisia has ratified the Convention for the Abolition of Forced Labour…”, he concludes.

A year later, the situation hasn’t improved. An important part of Tunisia’s main cities medical practitioners are on strike whereas the MoH keeps its grounds. It has even engaged into punitive measures through collecting the identities of the striking doctors and threatening to withhold the respective part of their salaries and trying 174 physicians in front of military courts for having refused to comply with the “civil service” law.

Also see: ‘Bad Healthcare: the Pandemics of Poverty’ more focused on the situation in Egypt (published on 19 November 2012, but still up-to-date)